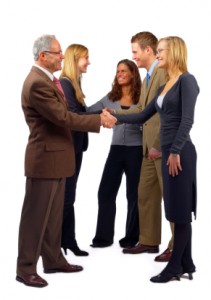 One of the best ways to grow in your leadership capabilities is to get involved with a networking organization. Serving in a leadership capacity is great exposure for your career and offers leadership growth. Here are some important aspects about networking group participation that will make a difference for you to grow as a leader:

I’m often asked what can be done to grow your career and I seriously think that getting involved in networking organizations can make a big difference. The amount of exposure to interesting people can be a great way for developing connections as well as opportunities to serve in other capacities.

I’ve found it’s really important to get involved in a group where you can make a difference. Sure, I attend meetings where I’m just there to meet someone, hear the speaker, get training, etc. But, more often, I’m attending meetings of groups that I go to on a regular basis.

For example, I’m very involved with the BYU Management Society. I first joined in 2009 at the recommendation from someone who had graduated from the Marriott School of BYU. Even though I didn’t graduate from BYU, I figured I’d attend a couple events to see what the culture and population had to offer.

The first meeting I was appalled to see only 2 other women out of a room of about 80 guys. My first thought was, “Where are the women? Why aren’t they here networking with their male peers?!”

Then it dawned on me: I can make a difference in this group! They need to explore getting more women involved! I talked to both women and found out that women rarely attend the monthly lunch networking events, but those who do come on a regular basis wish that more women would attend too.

As I dug in and found out more about the leadership of the organization, I realized that all that was needed was a woman to head up an initiative to include more women. Bam! The stars aligned and I got involved.

Now at those monthly networking luncheons, instead of only 2-3 women (of about 70-80 total people), we often have about 15-25 women. It’s lovely to see all those  smart, educated, talented, hard working professional women network amongst their male peers.

Don’t rush it: Eventually, overtime you’ll be noticed for doing great things in the organization and will likely be asked to move up the “ranks” of leadership. Usually, you need to put your time in first and grow with the group but sometimes higher level positions open up so take the opportunity when it arises!

This has happened to me with my roles at the BYU Management Society. In fact, I just finished my role as Chapter President and am now serving on the board as Past President and have recently been invited to serve on the Global Steering Committee. It’s a fun and wild ride and I didn’t even graduate from BYU! (Shush! Don’t tell anyone!)Always remember that service is a great way to grow and learn as a leader. Service in a networking group can be one of the most rewarding ways to develop your career.  Go for it!

How are you serving in your networking groups?