What is the definition of leadership?

I’m talking about you. In your current role, how do YOU define leadership?

With nearly 17 years of interacting with business “leaders”, I define leadership as what happens when you help another person. Leadership shows up best when you are helping someone else succeed. As you help others succeed, then you’re more successful. It always works that way.

I hope  you’re starting to see that there are many opportunities to be a leader and help others succeed, but not needing the title to be a leader. 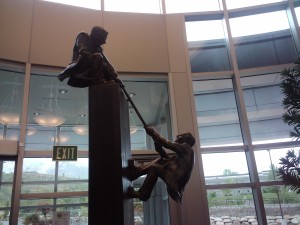 Leadership defined as helping another to succeed

When I walked into an office building in Salt Lake City, I saw this great statue in the foyer. Wouldn’t you agree that this is a wonderful image of helping another?! Whenever I think of leadership, I think of this statue and that great leadership is basically having a service mentality.

I’ve seen many people who down play their role in a company because they feel like they don’t have the “power” to do something. They feel un-empowered to make a difference because they don’t have the final decision making authority. But, in reality, the managers of the team, department, company, need others to step up and be leaders in various situations because those managers can’t be everywhere, all the time.

Recently, I was training a group of engineers about “Building an Environment of Trust”, and one of the engineers said that it wasn’t his job to follow-up with the younger engineers. He said, “When I started out, no one was there to help me. I had to learn quickly by paying attention and figuring things out on my own.”

I probed, “So, how long did it take you to just get comfortable with the work?”

Engineer, “A few years. There’s a lot to learn about being an effective and efficient in our roles.”

“How were you truly contributing to the team then, if it took you years to just get comfortable with your role?”

“What would it have meant to you to get more help, back in those early days?”

Engineer, “I wouldn’t have made so many mistakes! … Oh, I see what you’re saying. Make an effort to help the other new guys on the team so that they don’t have to waste time like I did.”

Don’t get me wrong, I think there’s a lot of power in being self taught and self motivated to figure things out, but sometimes all we need is a little direction so that we don’t waste time recreating past mistakes unnecessarily.

Be it helping a peer with a project… arranging additional technical training for a subordinate… going to lunch with your boss to “check in”. Furthermore, I think leadership is defined in your attitude and how you approach each situation – regardless of where the person fits into the organizational chart.

How do you define leadership?